Back in late 2007 i started seeing  news about some revolution that was coming to  sound in Linux . I remembered reading   about it being the:

next generation sound server for Linux, making all sorts of “ear-candy” possible: from dynamically changing the volume of individual applications to hot-plugging support for many different devices.

one of the  PulseAudio Dev in describe it said

One of the things !PulseAudio is supposed to be is a “Compiz for sound”.

Such was the hype around PulseAudio that many Linux users were expecting it to be the next best thing since compiz fusion.

well fast forward to 2009 and Pulse Audio is one of the most hated, curse at application on the linux Desktop. Although to be fair most of the issues people have with PulseAudio have much to do with the way Verious distributions packaged it than the progam itself.

Ok enough ranting back to the reason for this blog post

One feature i found interesting   about PulseAudio  was the ability to independently control the volume of individual applications on the fly, and its one feature that i have found missing in  various implementation of PulseAudio i have used  from Ubuntu 8.04,Ubuntu 8.10 to Fedora 10.. HOLD IT THERE! i didn’t say it wasn’t possible. just couldn’t be done on the fly with a few clicks.

To install, download the latest Installation package for your distribution  here http://code.google.com/p/gnome-pulse-applet/downloads/list (as at the time of this writing  only deb and rpm packages for ubuntu 8.10 and fedora 10 respectively were avalaible for download )

Once installed all you have to do is right click on an empty space in your gnome panel and add PulseAudio Volume Control. you can even change the appearance from vertical to horizontal by right clicking on the applet and going to preference. 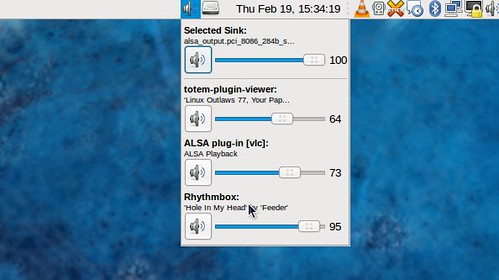 Gnome-Pulse-Applet is a cool program that brings one of the much talked about feature of PulseAudio to the masses. Although the project is still at an early stage, i tested it on my ubuntu 8.10 and it worked fine without any problem. I was able to control,mute and increase the individual Volumes of VLC,Firefox (streaming with Toteem) and Rhythmbox.  Anyway i saw a post about this applet on identica and i thought i should share. Hope someone find this usefull