Ok so today turned out to be a not so good day for me, and like all not so good days I try do something which would distract me, something i love doing. Hence this post. Nope I don’t want to talk about it.

So some months ago I got me an E71 Nokia phone, among other things I was hoping to use it as a music device so I slammed in an 8gb memory card, and was all set but for one factor: 60% of my music collection are in ogg format and nokia default music player does recognize ogg. Sure there are some 3rd party music apps for E71 which can play ogg files out of the box but they all lack the kind of integration which you get with the Nokia default music player. While in confused mode I decided to call up a friend nucco and he gave me the tip about .is_audio_player.

If like me, you have a music library made up of different music formats, and you want to be able to sync them to your portable music player in one music format say mp3. Example, my music collection is composed of different formats, .mp3, ogg, aac but I want to sync everyone of them as mp3 to my Nokia e71. This is where .is_audio_player comes in handy. Nope its not an application, nope its not a codec, its not a library either. Its just a file (yeah file) its a file you place in the root directory of the storage of your music device from where it does its magic.

First you open your favorite text editor (gedit, kate, emac, nano, vi whatever). Then you place in the following entries:

audio_folders = Here you indicate the relative path of the music folder on your portable device. On my Nokia its in Sound/Digital

folder_depth = Here you indicate the folder depth of the music folder (remember that every storage device attached to your Linux computer is mounted on /media/ hence you will start counting from the device mount point. In my case it was.

out_formats = The last parameter is quite straight forward it’s asking what media format you want your files to be encoded in before sync. In my case i want them encoded to mp3 hence i added audio/mpeg

Now configure the file the way it meets your needs and then save as .is_audio_player remember the . (dot) in-front of is_audio_player. Once the file is saved, place it at the root of your music device (Nokia, Sony Erikson, China Mp3 device etc). In my case i placed it inside the memory card of my nokia phone (make sure you are using a mobile phone that can be seen as a mass storage device)

Note: Any file with a . (dot) in-front of its name is hidden by default in Linux hence you may not see the file after saving it until you tell your filemanager to view hidden files (ctrl +h) for (gnome) and (alt + .) for (kde)

Below is the .is_audio_player file inside the memory card of my nokia. 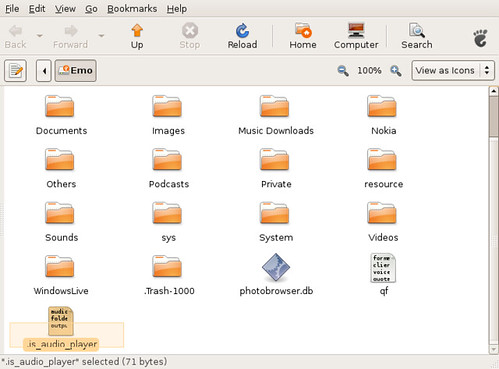 Once all is set, you can now plug your portable music player to your Linux computer and open Rhythmbox.

If all goes well Rhythmbox will detect your audio device. (in my case my nokia.) 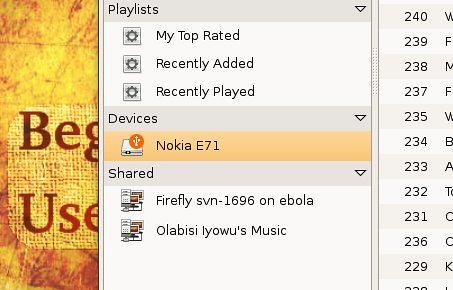 Transferring from your music library in rhythmbox to your portable music device might be slow, especially if it has to encode them to another music format before the transfer.

In the end I was able to encode all my ogg to mp3 files and sync them with my freedom hating E71 on the fly. I hope this helps someone out there.