I was giving a new laptop at work some weeks back so i decided to try another Linux distro on it .i use Ubuntu hardy heron on my home computer so i wanted something different on the work computer. my choice wasn’t too difficult because i have been hearing a lot of cool things about some Mint Linux which was suppose to be based on Ubuntu but comes preinstalled with a lot of things i user would have to install by hand on Ubuntu . so i stayed at office late into the night . went to www.linuxmint.com. downloaded it and installed it on my work laptop. It was to be the best decision i have ever made since switching to Linux . Some have called it Ubuntu made right. and its not had to see why,must of the things that i have personally wanted to have on Ubuntu out of the box came out of the box with MInt. Multimedia Codecs,Thunderbird mail clients,and a cool mint menu which some  legend says vista ripped off Mint . other cool things about mint is its simplicity for example i love the fact that you could uninstall a program just by right clicking it on the menu and choose uninstall . ndiswrapper is installed by default for those whose wireless card depend on it to work . that is one less thing to worry about.

Overall Mint is still very much like Ubuntu its 100% compatible with any application that works with Ubuntu and because mint is based on Ubuntu .every mint release is based on the most recent Ubuntu release . the latest version is Elyssa which is based on Ubuntu Hardy Heron . and yes it uses Ubuntu repository in combination with Mint’s own repository . i personally would recommend Mints to new users who wants to try Linux for the first time. it would be a pleasant experience 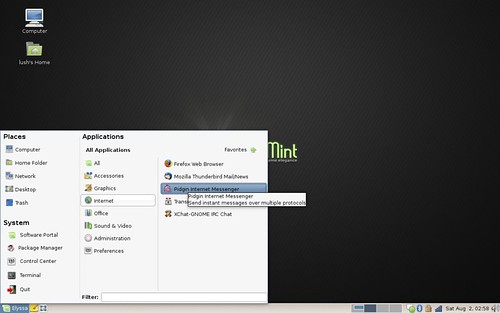