SGeMS is a software for 3D geostatistical modeling. It implements many of the classical geostatistics algorithms, as well as new developments made at the SCRF lab, Stanford University.
SGeMS relies on the Geostatistics Template Library (GsTL) to implement its geostatistical routines, including:

For news, tutorials, and an FAQ, visit the SGeMS wiki.

Where do i start? ..OK so i happen to be a Linux SysAdmin for some school. we use Linux on all our workstations including the laptops we gave to the students. so when i prof said he need a program called SGeMS for his class, it my job to get it done 🙁  i searched synaptic and that came with nothing (hmm sign of trouble) a little search on google took me to where i could download the source code. i downloaded it. checked the readme to see what is needs .. that was when i knew i was in for some serious ish. cut the long story short i went through hell  just to get the program to compile. but i the end i did. so i decided i no man should ever go through what i went through and i decided to document how i got SGeMS to install on ubuntu..

WARNING!!!
the following guide involve the use of command line, although i try to make it as simple as possible so you shouldn’t have any problem. .. remember i said shouldn’t

first we download sgems from here http://sourceforge.net/projects/sgems/
for this guide am using version 2.0

once the source code is downloaded.. we now have to install the dependencies it needs to compile which are
– GsTL (Geostatistics Template Library)
– Qt (GUI library) version 3.1 or higher
– Coin3D (OpenIventor library), version 2.x
– SoQt (Qt bindings for OpenIventor), version 1.x
– SimVoleon (Volume rendering extension for Coin3D), version 2.x
– Python
qt , coin,python and SoQt can all be installed from the ubuntu repositories

Qt when i tried searching for qt in synaptic .. billions of files came up out of the lot i installed

install with this command (copy and paste is allowed 🙂 )

time to install other dependencies

for some reasons downloading and compiling SimVoleon from here http://www.coin3d.org/lib/simvoleon threw up some funky errors about gcc .. anyway i went round that by downloading the latest version from subversion

Note: to use subversion you need to have it installed .. it can be easily installed by

sudo aptitude install subversion or search and install from synaptic.

create a directory called svn in your home directory

move into the directory

next we run the command that would download simvoleon from svn

give it some time.. you would see a prompt asking you to accept a certificate or some stuff like that .. you can choose to accept temporarily or permanently just don’t reject it 🙂

once simvoleon is downloaded you will find it under svn/ directory you created earlier .. now we need to go into the directory so we can compile it.

N.B before compiling any source code on ubuntu you need to install build-essentials meta-package which contains all tools needed for compilations mainly the GNU C compiler gcc

the last command would install SIMvoleon .. i didnt experience any error when i went about it this way.

we don’t need to compile GsTL just place it in the same directory that you would like to install SGeMS.

so place both SGeMS-2.0.tgz and GsTL-1.3.tgz in your home directory and we extract it using the tar command

we need to edit a hidden config file named .qmake.cache we would edit this point the variables to the correct location on your computer

look for the following lines and

save the text editor and close

now we need to edit you .bashrc file to include the paths necessarily for SGeMS to work

now save and close

now the last thing we need to don is direct Qt to libGsTLwidgets.so which can be found under the SGeMS directory

so run this in terminal qtconfig

now lets see if all the hard work paid up .. to run the program do this

you can write a script that starts it

open a test file and paste the following into it

so now when you want to start sgems .. just open your terminal and type sgems .. 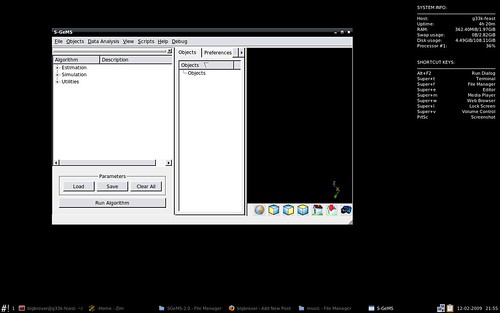 i Hope this helps some one .

If this works for your please let me know.

Thanks to Ting Li from the SGeMS mailing list for the tips he gave me without which i would still be hitting my head at the wall in frustration.