In the begining when i heard about adobe Air. i didnt give it a thought for one adobe was not a company renown for its for support for the Linux desktop. the fact that products like photoshop dreamweaver and a host of their top applications don’t run natively on Linux is a cliche. even the few products that have been ported are riddled with bugs, bugs you don’t get on their windows equivalent. However it seems attitude is changing and Adobe is starting to take Linux user more seriously. adobe flash player (very notorious been Firefox’s kryptonite on Linux and a general PITA) has improved alot with version 10x which was released the same day the windows version was released (doesn’t happen like this before most times we are always the last to receive updates) as if that was not enough adobe released 64bit version of its flash player on the Linux platform only.
How did i come to start using (and loving adobe air) well it started like this . i decided to join identi.ca (being opensource and having more geeks) i could update my twitter account with my identi.ca notices so it sounded like a win win situation. all was set and before long i was preferring it  to twitter. only problem i had was getting a client i could use with identi.ca. Twitterfox the firefox add-on i used for twitter doesn’t work for identi.ca. someone said gwibber but that wont connect to my proxy setup and it just crashed and burnt. cant remember we i saw it but the name twhirl came up and i decided to give it a try. this led me to install adobe air (since it was an adobe air application) and so far i have been having a swell time with it. Personally i think Adobe air is really cool and because its cross platform and the potential is huge. Already some really cool applications have been ported to it.
to install Adobe air

save it to your desktop, then open terminal /Applications/Accessories/Terminal
now copy and paste the following commands

then we make the downloaded application executable

then we install with

This would open and installer all you have to do now is follow the prompts to complete the install.

Once installation is completed. you can now download adobe air application which have .air extentions. just double click them and it would install .. if that doesnt happen. right click on it. go to properties from the context menu to to the openwith tab and choose Adobe Air Application Installer .

As of writing this the only Air application am using is twhirl. its a social software desktop client 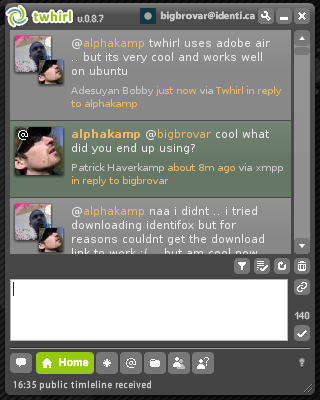 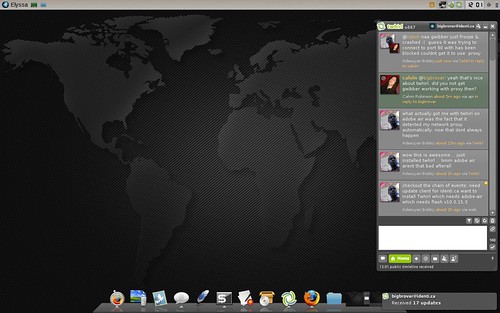